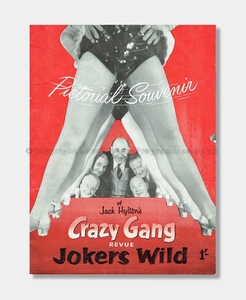 This larger format Pictorial Souvenir Programme is made up of cream paper and printed in white, black, red and grey inks. The front cover is a dramatic red background with photos of the cheeky faces of Nervo, Knox, Flanagan, Naughton and Gold peeking through the dancing girls’ legs.

The Pictorial Souvenir Programme is for the performance Jokers Wild, presented by Jack Hylton in 1954 at the Victoria Palace Theatre, London.

The programme has some fascinating editorials (including Jack Hylton) with some illustrations and some excellent photographs of some of the performers and stage acts.

The cast of dancing girls and comedy acts include five members of The Crazy Gang: Jimmy Nervo & Teddy Knox, Bud Flanagan, Charlie Naughton & Jimmy Gold. The Crazy Gang were six-man variety comedy troupe. In their pairs they were known as ‘Flanagan and Allen’, ‘Nervo and Knox’ and ‘Naughton and Gold’. They were a singing, dancing, acrobatic, comic extravaganza! The creation of the group happened gradually in 1931, during performances called ‘The Crazy Week’. Nervo and Knox, Naughton and Gold where pulled together with other double acts to create a variety show. Later Flanagan and Allen were invited to join the show. They were not known officially as The Crazy Gang until 1937. The Crazy Gang had an extremely successful stage career and due to their popularity they later on went to make such films as O-Kay For Sound (1937) and Life’s a circus (1958).

The programme is made up of 16 pages including front and back cover pages. Approx. H27cm x W21cm.

Condition Code: 3-4: The original staples still remain, slightly rusted but pages firmly secured. The programme has no evidence of foxing. Approx. 1cm tear to the centre right hand side of cover page 1. Overall the condition of the programme is very good for its age.