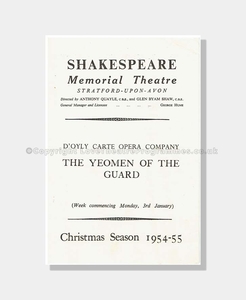 Performance: The Yeomen of the Guard

Performance: The Yeomen of the Guard

This 1950s programme presents The Yeomen of the Guard performed by D’Oyly Carte Opera Company in for the Christmas season of 1954-1955 at the Shakespeare Memorial Theatre in Stratford-upon-Avon, England.

Yeomen of the Guard is a comic operetta written by Gilbert and Sullivan and was first performed at the Savoy Theatre, London, in 1888.

The programme’s only advertisements are on the back cover; The top advertisement being the smaller of the two advertising the theatre restaurant’s opening times and the second advertisement taking ¾ of the page is for the 1955 winter season’s up and coming performances. The cast list is presented across page 2.

Gilbert & Sullivan were a prolific and successful two-man team who created fourteen comic operas together over a period of around 25 years. William S. Gilbert, born in London, (1836-1911) was a successful lyricist, poet and illustrator. Arthur S. Sullivan was the composer, also born in London, (1842-1900), the son of a military band master.

The programme is made of firm paper and printed in black ink; a single sheet of paper with a vertical spinal fold to create the programmes 4 pages including front and back cover pages; approx. H19cms x W12.5cms.

Performance: The Merchant of Venice