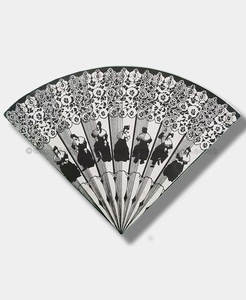 This extremely rare and unique fan-shaped programme presents Charley’s Aunt performed again in Bury St Edmunds for just 5 days in March 1955. The programme has been signed by Brandon’s children, Amy, Silvia and Jevan, (of whom Amy and Jevan both entered theatre life).

In February 1892, Brandon Thomas put on his original new comedy farce, Charley’s Aunt, in Bury Saint Edmunds, Suffolk, before transferring to the Royalty Theatre, London, in December 1892. The play was so successful, the need for a larger theatre caused yet another transfer, this time to the Globe Theatre in January 1893. (see programme)

Charley’s Aunt continued and became a huge success, attaining the record for the longest running play world-wide, including playing in USA and Paris, and finally being transferred to film.

Condition Code: 5: The fan shaped cover has done an excellent job protecting the internal pages, which do not look read. The programme is in excellent condition given its age of 65 years.