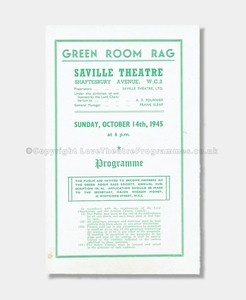 The Green Room Rag is a variety show of singing, dancing and comedy with a fabulous cast list including Bud Flanagan & Chesney Allen.

This mid 1940s theatre programme is made up of off-white smooth paper and stylishly printed in green ink.

In 1926 Bud Flanagan and Chesney Allen teamed up whilst performing for the Florrie Forde Show and became the comic double act ‘Flanagan and Allen’ of which they would perform comedy sketches and sing.  As the pair’s popularity grew, in the early 1930s, Flanagan and Allen became a part of the very successful entertaining troupe, ‘The Crazy Gang’.

The programme is made up of 4 pages including front and back cover pages. Approx. H21cm x W13cm.

Condition Code:4-5: The programme has no evidence of foxing, no tears or cuts. There is a small mark to the front cover page in the bottom left hand corner. The programme is great for its age.