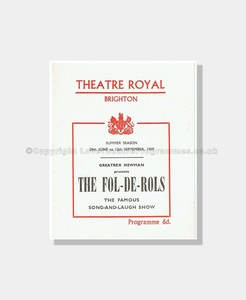 Fol-De-Rols was a music hall style show of variety acts which was annually performed across England and ran from 1911 – 1976. The sketches and lyrics of the variety acts were written by Greatrex Newman. The music for the performance was written by Harry Tait and Wolseley Charles and the dance arrangements by Thurza Rogers.

This cute little theatre programme has the date the play commences, printed as 29th June to 12th September, 1959  displayed in the centre of the cover page.

The Theatre Royal, Brighton was built due to royal command by King George IV (then, the Prince of Wales) in 1806 and opened in 1807. The first performance was Shakespeare’s Hamlet. Though the theatre’s life started with royal patronage the theatre began to suffer until 1854 when it was purchased by Henry J.N Chart and expanded. The Theatre Royal still stands and is currently owned by the Ambassador Theatre Group. The Theatre Royal, Brighton is a grade II listed building and has regular stage performances to this day.