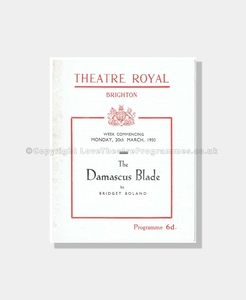 The cast list is presented across page 10 with interesting advertisements throughout. The programme has the date the play commences, printed as Monday, 20th March 1950,  in the centre of the cover page.

Sir Laurence Olivier (1907 – 1989) was an accomplished English actor, producer and director of the 20th Century. His acting career was focused on both stage and films. A prestigious theatre award was named in his honour in 1984 entitled ‘The Laurence Olivier’ award.

The Theatre Royal, Brighton was built due to royal command by King George IV (then, the Prince of Wales) in 1806 and opened in 1807. The first performance was Shakespeare’s Hamlet. Although the theatre’s life started with royal patronage the theatre began to suffer until 1854 when it was purchased by Henry J.N Chart and expanded. The Theatre Royal still stands and is currently owned by the Ambassador Theatre Group. The Theatre Royal, Brighton is a grade II listed building and has regular stage performances to this day.

Condition Code: 4: No foxing tears or cuts; no folds, pages smooth. Original single central staple holding pages firmly secure. Slight discolouration to the left side of cover page. The programme is in great condition for its age.

Performance: Rain on the Just