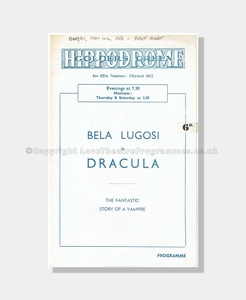 This early 1950s theatre programme presents the gothic horror play Dracula starring the legend of the role, Mr Bela Lugosi. Mr Lugosi became well known as a gothic horror movie actor having famously acted the part of Dracula in the famous 1931 movie. Mr. Lugosi has a star on Hollywood Boulevard and a statue in his native city of Budapest. Notation on front cover : Monday, May 14th, 1951 – First Night , presumably written by the original theatre-goer.

Built in 1913, the Hippodrome Theatre, originally as a music hall but eventually used as pre- and post- West End performances. In 1969 it was bought by the British Broadcasting Company (BBC) who used it as a radio station and a concert hall. The BBC invited many top rock bands including Queen; top comedy acts; drama and musicals; even boxing was broadcasted from this diverse venue.

Principal Performers: Members of The Boys Scouts of 1959