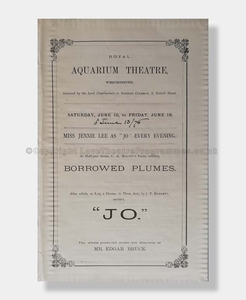 This beautifully clean Royal Aquarium Theatre programme presents Jo, an adaptation of Bleak House, by Charles Dickens. It has a decorative, crimped border as was popular in this period. Printed by Charles Dickens and Evans printers.

An incredibly rare programme as the production was performed for just 7 days. A finely scripted date is on the front cover, June 13/76, presumably written by the original theatre-goer.

An interesting note… Arthur Sullivan, the composer of Gilbert and Sullivan fame, was on the board of directors. The Royal Aquarium and Winter Garden, however, was not a successful venture and was sold in 1903. The Aquarium Theatre continued until its closure in 1907. The buildings were eventually demolished, and the Methodist Central Hall was built on the site in 1911 and stands there today.

Condition Code: 5: This 143+ year old programme is in exceptional condition; no folds, splits or tears; pages smooth and flat. Almost no evidence of handling.