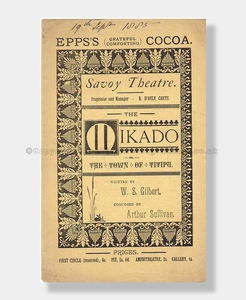 This rare theatre programme presents Mr. Richard D’Oyly Carte’s first production of Messrs. Gilbert and Sullivan’s comic opera, The Mikado, which premiered on the 14th March 1885 at the Savoy Theatre. It ran for 672 performances; however, this programme has been dated 19th September 1885 and is performed by Mr. D’Oyly Carte’s original London cast.

The Savoy Theatre was built by Richard D’Oyly Carte in 1881 and is situated in the Strand, London. It was the first public building built with electricity and was built to particularly showcase Gilbert and Sullivan operas which also became known as Savoy Operas.

1944 – Lyrics of Pirates of Penzance – Chappell of London

Publication: Lyrics of Pirates of Penzance or Slave of Duty by W. S . Gilbert and Arthur Sullivan.