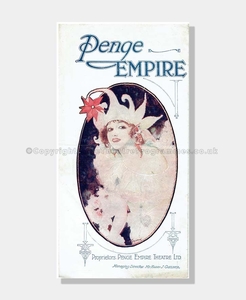 This large format, 6-sided, theatre programme presents the musical comedy, Katinka, which first opened at the Shaftesbury Theatre, London in 1923 to great reviews.

Condition Code: 4: No splits or tears; pages smooth other than one corner fold; Some aged discolouration.