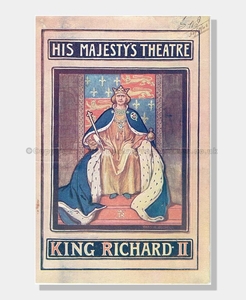 Mr. Herbert Beerbohm Tree played the leading role and produced the play. In a time when plays were becoming more minimalistic, Mr. Beerbohm Tree produced an extravaganza of elaborate sets and grand processions and large casting that brought Shakespeare and other classics back into the realms of popularity. Theatre was his life’s work, investor, builder, manager and lead actor. He founded the Royal Academy of Dramatic Art in 1904 and was knighted in 1909.

The colourful depiction of King Richard II on the cover was illustrated by Chas A Buchel.  A German born artist, emigrated to England as a child, Mr. Buchel became renowned as an artist specialising in painting portraits of actors, theatre programmes and souvenirs, theatre posters and magazines. He worked for Mr Herbert Beerbohm Tree for 16 years thus his art had a strong Shakespearian theme.

The programme contains several interesting editorials: Note by the Producer; The Date and Sources of the Play; Heraldry in the Time of King Richard II; The Appeal of Battle; The Character of King Richard II; Stage History and Stage Versions; A Genealogical Table; the cast list is on the inside front cover page. Fascinating reading.

12 pages including front and back covers; approx. 22cms x 14cms.

1913 – His Majesty’s Theatre – Joseph and his Bretheren

Performance: Joseph and his Bretheren