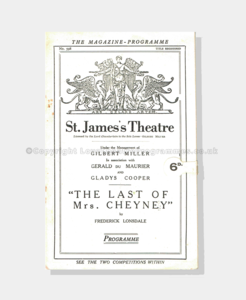 Performance: The Last of Mrs. Cheyney.

Performance: The Last of Mrs. Cheyney.

The programme is an off white matt paper magazine-programme printed in black ink with original seal on front and back covers with issue no: 598 printed on top left of front cover. The programme includes a Who’s Who article with Miss Jessie Winter (p3); Theatrical Confessions of Mr Franklyn Bellamy (p3); fun competitions; and entertaining stories and jokes. Along with interesting advertisements and detailed illustrations, there is a very entertaining advertising article by Gladys Cooper herself entitled ‘My Own Beauty Preparations’. This programme is filled with historical goodies and overall makes for an extremely entertaining read. The cast list is presented on page 9 and includes Gerald du Maurier (also known as Sir Gerald Hubert Edward Busson du Maurier), the father of Daphne du Maurier famous author of such novels as Rebecca, The Birds and many more. Alongside Gerald du Maurier starred the extremely respected actress Gladys Cooper.  Gladys Cooper was born in 1888 – 1971, who started her 70 year successful acting career on stage as a teenager and in later years went on to staring in such films as Now, Voyager (with Bette Davis, 1942) and my fair Lady (with Rex Harrison and Audrey Hepburn, 1967) and also appeared on television. At the age of 79 (1967), she was awarded ‘Dame Commander of the Order of the British Empire’ (DBE).

The programme consists of 20 pages including front and back covers. Approx H 21cm x W 14cm

Condition Code: 4-5: Two rusting staples but pages firmly secure; clear tape over staples in centre pages as preventative measure by a previous collector. Very minimal faint foxing on pages 1,19,20. Date sticker also from previous collector on top right of back cover. However pages are smooth and flat with no nicks or tears and programme in very good condition.