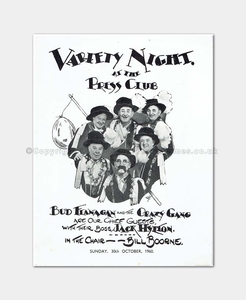 This is the menu and programme for a very special evenings’ entertainment at the Press Club; established as a Gentlemen’s club in 1882 and still in existence today as a society for journalists. The programme is humerous from beginning to end with a ‘pause for thought’ on the back cover! A rare find and a true collectors item.

Bud Flanagan, was London born as Chaim Reuben Weintrop, (1896 – 1968).  He became a famous comedian and had a successful career on both stage and screen. He was a very popular world-renown performer particularly remembered for entertaining the troops during WWII and keeping up moral. Bud Flanagan paired up with Chesney Allen in 1926, another up and coming comedian. They toured with The Florrie Forde Show as the comedy act ‘Flanagan & Allen’ of which they would perform comedy sketches and sing. From a young adult, Bud Flanagan had the good fortune to travel and perform around the globe; in 1915 he enlisted into the during the the First World War. During his time in the army he met a Sergeant-Major Flanagan who, by some as The Crazy Gang.

The Crazy Gang was six-man variety comedy troupe. In their pairs they were known as ‘Flanagan and Allen’, ‘Nervo and Knox’ and ‘Naughton and Gold’. They were a singing, dancing, acrobatic, comic acting group. The joining of the group happened gradually in 1931, during performances called ‘The Crazy Week’. Nervo and Knox, Naughton and Gold where pulled together with other double acts to create a variety show. Later Flanagan and Allen were invited to join the show. They were not known officially as The Crazy Gang until 1937. The Crazy Gang had an extremely successful stage career and due to their popularity they later on went to make such films as O-Kay For Sound (1937) and Life’s a Circus (1958).

Condition Code: 4-5: Made of stiff card this programme of events has remained undamaged and in excellent condition for its age. The pages are smooth with minimal signs of any handling.