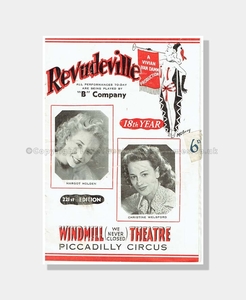 The Windmill Theatre (re-named The Windmill International), was a well-known theatre situated on Great Windmill Street in London, popular for the Revue and Variety theatre performances. It was originally opened as a cinema in 1909 (Palais de Luxe) and was one of the first cinemas to show silent films. However, due to the growth of larger cinemas in London, the cinema was forced to close. It wasn’t until 1930 that the building transformed into the Windmill Theatre. It was well known for its glamorous nudes on stage known as ‘The Windmill Girls’.

In this Revudeville programme there are photographs on the front cover of Margot Holden and Christine Welsford, two of the legendary Windmill Girls of the ‘Revudeville 18th Year’, ‘B’ Company’ 221st Edition. The internal pages are a mix of informative advertisements, detailed illustrations and smiley photos of Windmill Girls and entertainers of the performance.

Condition Code: 3-4: Two staples with pages firmly secured. No tears. General wear to front cover due to handling. This programme is in excellent condition for its age.