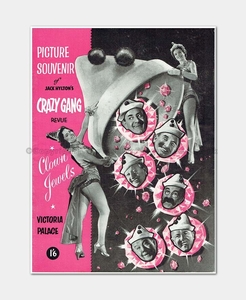 This special theatre programme is for the performance of Jack Hyltons’ Crazy Gang revue, Clown Jewels; a variety show at Victoria Palace Theatre in 1959. The front cover is a dramatic black and pink design with two photographed dancing girls holding each side of an enormous illustrated clown hat and falling out of the clown hat are illustrated large pink jewels encasing the photographed faces of The Crazy Gang.

This souvenir theatre programme/book is made up of smooth paper and printed in pink, black, white and grey inks. 16 pages including front and back cover pages. Approx. H29cm x W21cm.

Condition Code: 4: Original staples remain and pages firmly secured. The programme has no evidence of foxing, no tears or cuts.  The condition of the programme is really good for its age.