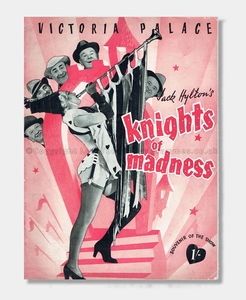 This special souvenir theatre programme is for the performance Knights of Madness presented by Jack Hylton in 1950 at the Victoria Palace theatre.

It is filled with photographs of the cast in costume and fantastic photographs of the stage acts which exude the energy and excitement of the show. Page 16 has articles of the people behind the show, including song writer Ross Parker; Alec Shanks the producer and co-designer of the show; George Carden the choreographer; Freddie Bretherton the musical director and Jack Hylton the producer. The programmes do not have a specific cast list, although the cast are mentioned throughout the programmes pages, dominated of-course by The Crazy Gang. There are plenty of fantastic photographs of The Crazy Gang throughout the programme.

The Crazy Gang were six-man variety comedy troupe. In their pairs they were known as ‘Flanagan and Allen’, ‘Nervo and Knox’ and ‘Naughton and Gold’. They were a singing, dancing, acrobatic, comic acting group. The creation of the group happened gradually in 1931, during performances called ‘The Crazy Week’. Nervo and Knox, Naughton and Gold were teamed up with other double acts to create the variety shows. Later Flanagan and Allen were invited to join. They were not known officially as The Crazy Gang until 1937. The Crazy Gang had an extremely successful stage career and due to their popularity they later on went to make such films as O-Kay For Sound (1937) and Life’s a Circus (1958).

The programme is made up of 16 pages including front and back cover pages. Approx. H30cm x W21cm.

Condition Code: 3-4: Staples still remain and pages firmly secured. The programme has no evidence of foxing. There is evidence of vertical fold to centre of programme. Overall the condition of the programme is good for its age