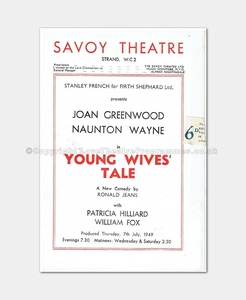 The production of Young Wives Tale is a comedy in three acts written by playwright Ronald Jeans, directed by Michael Macowan and performed at The Savoy Theatre. This interesting theatre programme presents the cast list across page 5 and it includes advertisements with detailed illustrations and a couple of black and white photographs. Page 4 has a lovely black and white head shot photograph of the beautiful actress Joan Greenwood, who is smiling approvingly to promote the ‘Ovaltine’ hot drink. The original black and white seal sticker still remains on the front and back cover.

For this specific production of Young Wives Tale at Savoy Theatre, Strand, Naunton Wayne and Joan Greenwood have been kindly loaned by permission of the J. Arthur Rank Organisation. Mr Ronald Jeans wrote his play ‘Young Wives Tale’ in 1949 and in 1951 was made into a film starring Henry Cass and Audrey Hepburn. As well as being a successful playwright, writing other such plays as ‘Can the leopard…?’ and ‘Grace and Favour’, Ronald Jeans was also the founder and managing editor of The Liverpool Post and Mercury.

The Savoy Theatre was built by Richard D’Oyly Carte in 1881 and is situated in the Strand, London. It was the first public building built with electricity. The Savoy was built to showcase Gilbert and Sullivan operas which eventually became known as Savoy Operas. The theatre even went on to showcase Gilbert and Sullivan premiers. The theatre also lays claim to showcasing the premier of Blithe Spirit by playwright Noel Coward and Oscar Wild’s Salome. The theatre still stands and houses regular stage performances and It is now a grade II listed building.

This theatre programme is of white smooth cream paper printed with red and black ink consisting of 12 pages including front and back cover. Approx. H 19cm x W 13cm.

Condition Code: 3-4: No foxing, tears or cuts. Staples remain and pages firmly secure. Evidence of faint fold to bottom right corner of cover page. The programme is in really good condition for its age.

Performance: Angel in the House