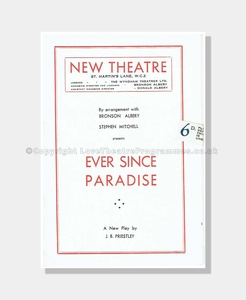 This 1940s theatre programme presents a new play, Ever Since Paradise, written by the playwright Mr J. B. Priestley and is described by the programme as ‘an entertainment chiefly referring to love and marriage’. The programme has interesting advertisements, some with detailed illustrations. the cast list is presented across page 3 and the original black and white seal sticker remains on the front and back cover.

This production of Ever Since Paradise was performed at the New Theatre on St Martins Lane, London, which was built in 1903 by Sir Charles Wyndham. Sir Charles Wyndham employed the architect William G.R Sprague (1863-1933) to build his theatre. Mr Sprague had a successful career and was well known for his work as a theatre architect. During its lifetime, the theatre has been renamed twice. In 1973 it was renamed the Albery Theatre after the manager of the theatre, Sir Bronson Albery, who ran the theatre for many years. In 2006 the theatre underwent a major refurbishment and was renamed Noel Coward Theatre after the famous playwright.

Condition Code: 4-5: The programme has no splits, tears, foxing or folds. The two original staples remain, pages firmly secured. Pages smooth showing minimal evidence of any handling. The programme is in great condition for its age.